Tell me them Special Cs over at WHIG-TV this morning said Reuben Blackwell should not have responded to Warren Daughtridge LoveRockyMount founder. Really!

So they think they can say what they want and Black Folk suppose to accept it. Oh hell no!

Click On Photo To View More Photos
This Guy Right Here Though, Damn He Was Good!

Click On Photo To Watch Video
”Don’t Blame Me!” Part 2 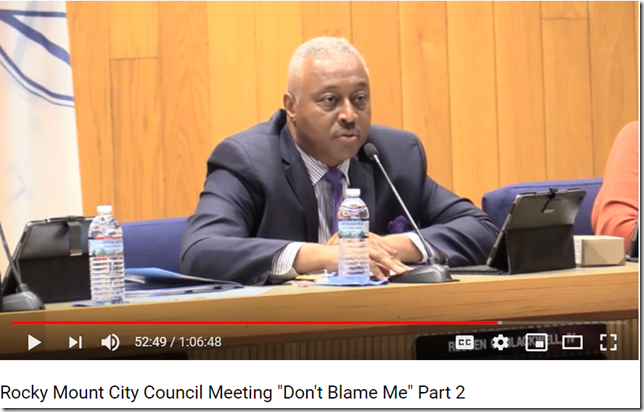 Click On Photo To Watch Video
”Don’t Blame Me!” Part 1

The Watch Dog response: Wow! I was wondering who had put Lindell on this and then the 1st comment was Elijah Daughtridge. One thing I can say The Community Council and Lige are persistent and consistent with their passion to go after the Rocky Mount City Council. What tickles the hell out of me is that I have been actively engaged in activism since the late 80’s and I used to say to black officials what are you doing to promote jobs and other that benefit black folk and other folk like the white officials were doing. The white officials were on the boards and commissions and obtaining land and creating jobs. Well it appears that when white white businessmen and other were doing things it was ok. It appears that any time the  black man begin to rise up, there is a movement to make it appear he is doing something that is not right.

A new conflict of interest policy under consideration by the Rocky Mount City Council may affect whether some council members will have a vote on certain matters — possibly including the Rocky Mount Event Center.

The proposed policy presented to the council during last week’s Committee of the Whole meeting adds federal guidelines to existing local and state rules. The guidelines apply to sub-recipients and includes apparent conflicts as well as actual conflicts.

Councilman Reuben Blackwell asked city staff about making sure the council signs all the required documents. He said he wants to make sure the council understood the policy and all it entails.

Blackwell is the president and chief executive officer of the Opportunities Industrialization Center, a nonprofit organization that helps residents with health care, job training and other programs. He earned a $141,114 salary from OIC in 2015, according to the most recent IRS tax forms made available by GuideStar, a watchdog organization that provides information on nonprofit groups. (Read more)

Response: Congratulations Reuben Blackwell on becoming the new chairman. I wish I could make it to the event but I have a prior engagement.

Tickets have gone on sale for the Rocky Mount Area Chamber of Commerce’s annual meeting that will feature a keynote speech from a top-ranking economist for the U.S. Department of Commerce.

Tickets are $40 for this year’s event, which is scheduled to begin at 6:15 p.m. on Feb. 4 at the Gateway Convention Center.

The 110th annual meeting also features a dinner, the passing of the gavel to the new Chamber president, the announcement of the winner of the 2013 Distinguished Citizen of the Year Award and a brief overview by Chamber officials of the year ahead.

The keynote speaker will be David S. Langdon, a senior economist and senior policy advisor to the secretary of the U.S. Department of Commerce. (Source)