The Gate Keeper response: I totally agree. They don’t want to hear them trues. They just lie, lie, lie just like that other guy on the national level!

Three words you almost never hear from politicians is “I was wrong.” I’m not one, but can admit that on the subject of Medicaid expansion I was wrong. Now our legislature should do the same.

When The Patient Protection and Affordable Care Act was passed in 2010 there were many questions about whether it would stand court tests, how it would be implemented and how well it would work. One of the provisions of ACA or Obamacare was that those with income levels of less than 138 percent of the federal poverty level would be included in the expansion of Medicaid.

Three words you almost never hear from politicians is “I was wrong.” I’m not one, but can admit that on the subject of Medicaid expansion I was wrong. Now our legislature should do the same.

When The Patient Protection and Affordable Care Act was passed in 2010 there were many questions about whether it would stand court tests, how it would be implemented and how well it would work. One of the provisions of ACA or Obamacare was that those with income levels of less than 138 percent of the federal poverty level would be included in the expansion of Medicaid. (Read more)

For ten years, the 60-year-old chief justice of the nation’s highest court was considered a conservative darling, consistently advancing the right’s agenda with major rulings on issues such as campaign finance, religious freedom, reproductive rights, guns, and race.

But this term has seen a remarkable shift to the left for the Roberts court. And for many conservatives, the chief justice’s decision on Thursday to side with the liberal wing in upholding a key provision of the Affordable Care Act – for the second time – marked the ultimate act of betrayal. (Source: Read more)

Montana’s Republican-controlled House voted Thursday, 54-46, to approve federal subsidies for Medicaid expansion. Although Democrats are outnumbered 59-41 in the Montana House, a unified Democratic caucus joined forces with 13 Republicans who defected from their party’s leadership, to push Senate Bill 405 through the House chamber. The bill would expand Medicaid coverage to between 27,000 and 46,000 low-income Montanans who earn less than 138 percent of the federal poverty level.

All 41 House Democrats approved the Medicaid expansion. Republicans opposed it 46-13, but the 13 defectors were enough to tip the balance to pass the measure. House Republican leaders tried to kill the bill, but they were unable to keep their party unified in opposition. One defector, Rep. Geraldine Custer (R-Forsyth) argued in defense of the bill, noting that its main beneficiaries would be the working poor. Custer stated: (Source: Read more)

The Political Agitator response: Just because our President is black. When will they ever get over it? Never! I can’t wait to see what they are going to do when his term is over. This is one of the best articles I have read in a long time. This is an awesome report!

Let’s sing the praises of Obamacare for a minute.

Get back here! I said just for a minute. OK, it’s not the tidiest law in history. You’re probably still sulking because you wanted something simple and rational, like a single-payer plan. But it’s here, and about 10 million people have health coverage who didn’t have it before.

Plus, it’s apparently working better than any of us imagined. Here is how great the Affordable Care Act is doing: The Supreme Court is about to hear a challenge to the law, filed on behalf of four Virginia plaintiffs, who claim to have suffered grievous harm by being forced to either buy health coverage or pay a penalty. Lately, reporters have been trying to track down this quartet of pain, and discovered they are: (Source: Read more)

See related: Why so many Americans still deny racism exists when the evidence is everywhere – VOX

The U.S. Supreme Court on Monday declined to take up another broad challenge to President Barack Obama’s signature healthcare law.

The court rejected an appeal filed by the Association of American Physicians and Surgeons and the Alliance for Natural Health USA. The groups had challenged various aspects of the law known as Obamacare including the so-called individual mandate that requires people to obtain health insurance or pay a tax.

In March 2014, the U.S. Court of Appeals for the District of Columbia Circuit ruled in favor of the Obama administration. In 2012, a district court judge also ruled against the challengers.

The 2010 healthcare law has been subjected to numerous legal challenges, including a key 2012 case in which the Supreme Court upheld the bulk of the law on a 5-4 vote. (Source: Read more)

NEW YORK (Reuters) – Leading U.S. CEOs, angered by the Obama administration’s challenge to certain “workplace wellness” programs, are threatening to side with anti-Obamacare forces unless the government backs off, according to people familiar with the matter.

The programs aim to control healthcare costs by reducing smoking, obesity, hypertension and other risk factors that can lead to expensive illnesses. A bipartisan provision in the 2010 healthcare reform law allows employers to reward workers who participate and penalize those who don’t. (Source: Read more) 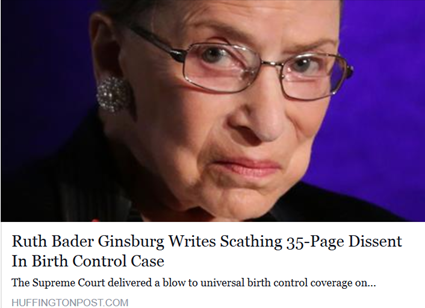 Click on photo to read what Ruth Bader Ginsburg had to say reported on the Huffington Post.

A depressing but unsurprising decision by the majority, and a rational dissent by Justice Ginsburg. I think that Justice Ginsburg is correct that the Court has stepped into a minefield. I also think that it’s going to explode at some point and inflict a lot of damage. The religious beliefs of corporations, closely held or not, should play no role in the coverage offered in health plans for employees. What if the business is a closely-held corporation in which the employers’ faith prohibits blood transfusions, does this decision mean that the corporation can refuse to cover blood transfusions in their health plans for religious reasons? Far-fetched? Not in the least. There are religions that oppose blood transfusions and this decision certainly could be used to argue the closely-held corporation’s right to act according to its owners religious beliefs.

"The Supreme Court delivered a blow to universal birth control coverage on Monday, ruling that closely-held corporations can refuse to cover contraception in their health plans for religious reasons. But Justice Ruth Bader Ginsburg sharply disagreed with the five conservatives on the court, delivering a scathing, 35-page dissent and defense of mandatory contraception coverage."

"In a decision of startling breadth, the Court holds that commercial enterprises, including corporations, along with partnerships and sole proprietorships, can opt out of any law (saving only tax laws) they judge incompatible with their sincerely held religious beliefs," Ginsburg wrote. She said she feared that with its decision, the court had "ventured into a minefield." by Sheria Reid

Note: I am not only friends with Attorney Sheria Reid on Facebook but I know her on a personal note. She is originally from Wilson NC. I met her when she worked for the NC Justice & Policy Center whereby I went through training with her and I received Certificates from the Education & Law Project in the late 90’s. Sheria is a strong intelligent black female.