(Reuters) – A predominantly Black group of heavily armed protesters marched through Stone Mountain Park near Atlanta on Saturday, calling for removal of the giant Confederate rock carving at the site that civil rights activists consider a monument to racism.

Video footage of the Independence Day rally posted on social media showed scores of demonstrators dressed in black – many in paramilitary-style clothing and all wearing face scarves – quietly parading several abreast down a sidewalk at the park.

Many of the protesters carried rifles, including military-type weapons, and some wore ammunition belts slung over their shoulders. Although African Americans appeared to account for the vast majority of the marchers, protesters of various races, men and women alike, were among the group.

One video clip showed a leader of the demonstrators, who was not identified, shouting into a loudspeaker in a challenge to white supremacists who historically have used Stone Mountain as a rallying spot of their own.

I was added to a group that is going after the organizers of the sympathy walk that was held recently as different areas were protesting and rallying because of Black Lives Matter but I left the group.

I didn’t agree with how the group carried it out and it appeared that Jesse Webb Tarboro Police Chief had organized it. If the folk who were a part of the walk liked it, I loved it.

I voiced my opinion about the walk and I believe one of the organizers Unfriended me and if they did it because they got offended with what I said then that is a they problem. My comments were focused on the chief comments during the march and those that have continued afterwards.

Tarboro is sitting on a time bomb as it relates to the Confederate Monument on the Commons because the conversation is being avoided publicly. There are some conversations going on but folk ain’t talking to the right folk. This is doing nothing but causing division among Black Folk while the Caucasian community is just sitting and waiting to see how this thing going to unfold.

My question is why do Tarboro feel it is exempt from the Confederate Monument issue that is going on across the nation because something is going to be done. There are some folk that are going to make sure the monument is on the table of discussion.

I challenge the folk of Tarboro to stop going at it in that group talking about the Sympathy Walk. The walk is done and over so now the discussion need to be geared toward talking about the issues that are going on across the nation and especially in the local areas. Rocky Mount, Greenville, Wilson and other surrounding areas are and have been dealing with the monument issue and other so you better get onboard.

In my closing I have seen where a certain person is going after a female and what I do not condone is to be a part of a group and allow a male to go after a female. So if any males are in the group and they are not telling the male that he need to leave the female alone then something is wrong. 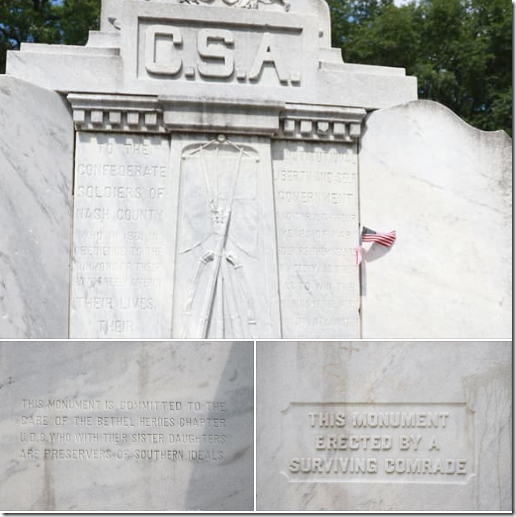 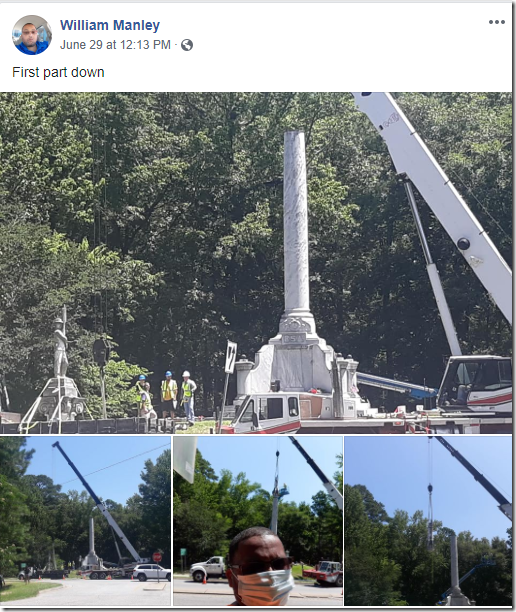 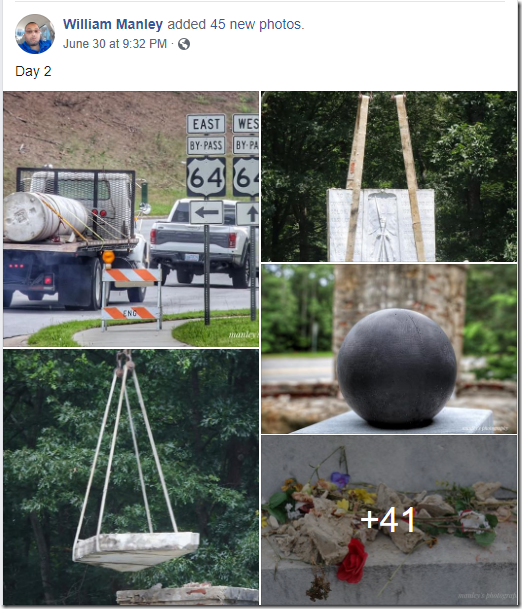 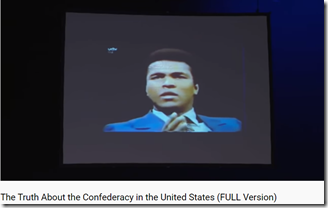 Click On Photo To Watch Video
The Political Agitator’s response: Everyone need to see this! Wow! This is it! if you don’t have a changed mindset then something is wrong! I agree taking down the monuments mean dealing with the truth.
Jeffery Robinson, the ACLU’s top racial justice expert, discusses the dark history of Confederate symbols across the country and outlines what we can do to learn from our past and combat systemic racism. 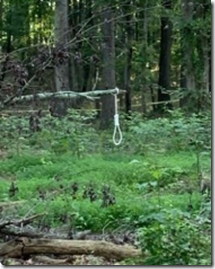 Sources say this hangmans noose was found at Battle Park Rocky Mount NC. They big man because of the removable of their baby. I feel good to have been on the Rocky Mount Human Relations Commission during the time of the 4 Community Discussions we had on the removal. The 40,000 consultant fees I felt was not needed and the thing to do was to just remove it, but money well spent.
#Timeforwaitingisover
#Fearoftheshiftabsodamnlutely
#Sickandtiredofbeingsickandtired
#Blacklivesmatter #Iwatchedvideo
#Whereisthethreat
#Icantbreathe8minutes46seconds
#Policebrutalitymurdertheytired
#1898WilmingtonRaceRiot
#1921TulsaBlackWallStreet
#Confederatemonumentstograveyard
#Tiredofsafenegroblackfolk
#Unstablepresident
#Iamnotok #Ibeenengagedbeforenow
#Coronavirusstayfocused #Stayhome

School board member called out for defending Robert E. Lee 01:59

The Confederate Monument on Falls Road need to come down immediately before it become a news story for being torn down and/or destroyed.

It has been clear that some folk have wanted it down years ago when someone tried to destroy it which resulted in the city taking down the 4 sides to the statue and have them stored in a warehouse.

I served on the Rocky Mount Human Relations Commission and we held a series of 4 meetings discussing the Monument. A consultant was paid $40,000 to come in and moderate the discussion when the city could have just taken it down. But folk don’t want to talk about that monies being used. I said it was unnecessary then and it is evident that in this season, they are coming down across the nation.

The Rocky Mount City Council voted 6-1 to take it down. The mayor who only votes during a tie also said that if it had been a tie he would have voted to remove it. The Elected Officials have spoken so remove it now today!

I have ordered the Confederate monuments on the Capitol grounds be moved to protect public safety. I am concerned about the dangerous efforts to pull down and carry off large, heavy statues and the strong potential for violent clashes at the site. If the legislature had repealed their 2015 law that puts up legal roadblocks to removal we could have avoided the dangerous incidents of last night.

Monuments to white supremacy don’t belong in places of allegiance, and it’s past time that these painful memorials be moved in a legal, safe way. – RC

After marching in celebration of Juneteeth, the day commemorating the end of slavery in the United States, demonstrators threw yellow ropes around two of the statues on the 75-foot tall Confederate monument on the ground of the North Carolina State Capitol. The demonstrators then pulled on the ropes–one of the statues swaying–but neither figure fell.

Police officers then intervened, preventing the demonstrators from completely pulling the statue down before leaving the site.

On a second attempt, demonstrators returned to the monument and successfully removed both statues before dragging them down W. Hargett Street. One Confederate statue is now hanging from a light post along W. Hargett Street and another on the steps of the Wake County courthouse. (Read more)

FAYETTEVILLE, N.C. (WTVD) — The Fayetteville historic Market House is back in the spotlight, as Confederate statues come down across the country.
A petition to tear down the building, where slaves were once sold, has nearly reached 115,000 signatures, just around 36,000 shy of its 150,000 goal.

“Most African Americans in the city wish for it to be taken down and replaced with something more positive about African American history,” the petition reads. “The Market House building is a reminder of slavery and fuels white supremacy.”

Robert Taber, an assistant professor of history at Fayetteville State University, said historical records show slaves were sold at or near the Market House.
“We have the records and it happened fairly often, and I think it’s a real mistake to downplay the realities of that,” Taber said. (Read more)

Today, Rocky Mount City Council voted to remove this confederate monument from Battle Park. I asked the Council for such a bold step years ago. I am delighted to know they are moving to remove the remainders of the lost and racist cause of America’s Confederate. Bye Bye monument! Bronson Williams

It is time for the Confederate Monument in Rocky Mount to come down as well! 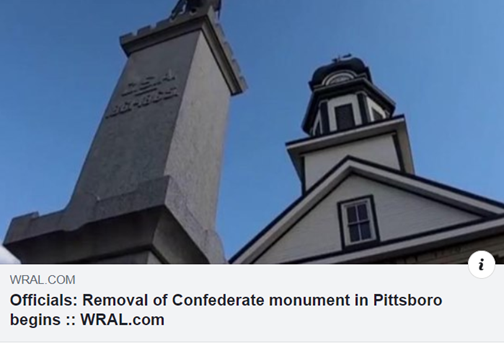 PITTSBORO, N.C. — Officials said Tuesday night the removal of the Confederate monument outside the Chatham County courthouse in downtown Pittsboro has begun.

A press release from Chatham County Public Information Officer Kara Lusk Dudley says crews were working to “safely and respectfully dismantle the Confederate monument, which includes the statue and pedestal. These items will be transported to a safe location where they will be preserved and stored until such time as the Winnie Davis Chapter of the United Daughters of the Confederacy (UDC) finds a more appropriate location to place them.” (Click On Photo To Read Entire Article)

The Political Agitator’s response: It is past time that Rocky Mount NC remove the Confederate Statue at Battle Park right beyond The Rocky Mount Mills that is bringing life back to the Mills. The statue do not represent Unity and need to go. It is sad that as The Mills is bringing folk from all over to Rocky Mount as they leave out from the Mills a few feet there you have it. There were meetings held on the controversy around the statue so the Rocky Mount City Council need to give a report on the status.

PITTSBORO, N.C. (WTVD) — A Confederate statue in Pittsboro will be removed from the Old Chatham County Courthouse and historic museum grounds.
On Wednesday, a judge denied a request from the United Daughters of the Confederacy to keep the statue there.

The county gave the group until November 1 to remove the statue or it would take action. But last month, a judge blocked the county from removing the statue — until Wednesday.

The UDC argued through its attorney in court that taking the statue down would cause irreparable harm.
But Judge Susan Bray said she felt the United Daughters of the Confederacy did not provide sufficient evidence to support why the statue should stay. (Read more)

PITTSBORO, N.C. (WTVD) — Nearly a dozen people are facing charges after a brawl in Pittsboro during a Confederate Statue protest on Saturday.
The statue is slated to be removed after a judge determined earlier this month that the United Daughters of the Confederacy did not provide sufficient evidence to support why the statue should stay.
ABC11 newsgathering partners at the News and Observer says the fight erupted at the statue when protesters against the statue’s removal complained about counter-protesters standing near a protester’s vehicle. (Read More)