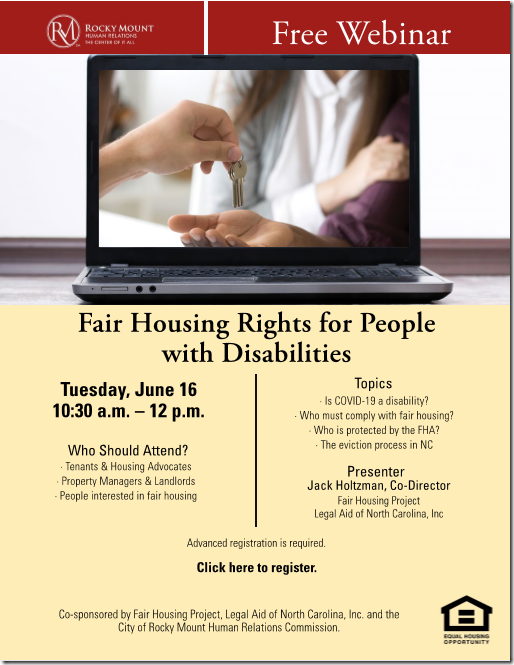 Please find attached the flyer highlighting our upcoming Fair Housing Webinar on Tuesday, June 16th from 10:30 a.m. to 12:00.  This is a another partnership between the Human Relations Commission and Legal Aid of NC. The presenter will be Jack Holtzman, Co-Director Fair Housing Project, Legal Aid of NC. Please share this with others..

Note: If someone encounters a problem registering online, you may call 252-972-1181 for assistance.

Rocky Mount Black Action Committee held a protest/march in Rocky Mount at the Confederate Monument on Sunday May 31, 2020. The protest went without any problems. Cooper Blackwell son of Rocky Mount Councilman Reuben Blackwell started the BAC.

After the BAC protest a couple of days later the Rocky Mount City Council voted to remove the Confederate Monument from Falls Road at Battle Park.

There were a group that held a march in Pinetops on Sunday June 7 to highlight Black Businesses that used to exist in the City. I am still trying to figure out how this related to the most recent killings.

There were a group that held a Sympathy Walk in Tarboro on Sunday June 7 and I am still trying to figure out how it relates the most recent killings. It appears that the focus of sympathy walk seems to be highlighting the Caucasian Tarboro Police Chief. 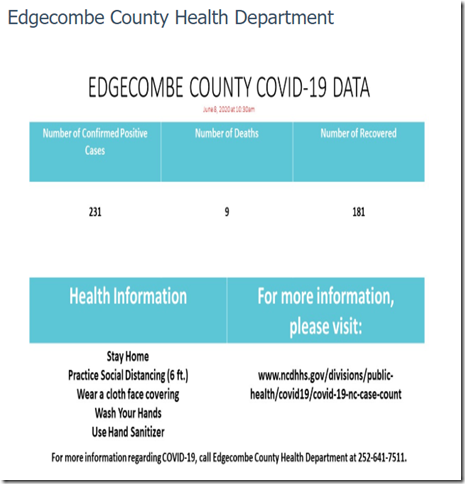 Sheriff Clee Atkinson submitted a request for salary increases that amounted to $940,000 — sans benefits — prior to the meeting, but Commissioner Billy Wooten got discussion started on $250,000 in additional pay for detention center officers and staff only.

Wooten said he designated detention center personnel because they were the lowest paid and had the highest level of turnover.

In the end, a unanimous vote earmarked an additional $350,000 for pay for deputies, detention officers and staff. (Read more)

A black police officer was killed by a black young man, why is this kept a secret by the media and the “YOUNG” BLM MOVEMENT ? oh shoot I’m so damn sorry for being out of the fn narrative.

But you haven’t changed the narrative to the Young Black Male Movement because they are still doing what they do.