No. 2 Rocky Mount High (6-4) vs. winner of Franklinton/Southern Nash

The Gate Keeper’s response: This is a very good letter and the folk need to read it and see that hope is still alive. The Twin Counties continue to move forward and good things are happening but greater things are coming.

A new call center in Spring Hope; Pfizer and Cummins are growing; ABB is adding new space and jobs; Triangle Tire and Corning are about to begin major construction on their buildings; The CSX/DOT project, The Carolina Connector multimodal, will be coming out of the ground in April; a new Community College Training Center will begin construction this spring; the Rocky Mount Mills project continues to grow; the Event Center is going very well — and so much energy and vibrancy is being generated by all this activity that one can just feel the excitement in the air as you journey around the two counties and the towns and communities.

And there is more to come.

If the Council of State votes to relocate the DMV headquarters to Rocky Mount, . . . (Read more)

The Gate Keeper’s response: This is a very good article.

The proposed DMV move brings to mind one of the old Three Stooges comedies, the one where one of the zany trio says, “I’ve cut this board three times and it’s still too short.” Our state continues to take cuts at property decisions and keeps coming up short.

State political leaders have known for decades that the Department of Motor Vehicles needed to move out of its headquarters on New Bern Avenue in Raleigh. The state has tried adding to, patching up, and working around asbestos and wiring problems that were genuine safety issues, even getting a waiver of safety laws to continue using the building until the legislature and executive branch would get their collective act together and take action. Dare we say this has been a classic case of government inefficiency? (Read more)

Look at the video to see what was discussed at the Rocky Mount Human Relations Commission meeting. See who are on the commission. Yours truly is behind the camera.

These meetings are open to the public and are held every 2nd Wednesday 4:00 PM every month.

What transpired this evening with Rocky Mount Concerned Citizens Group

Two days ago someone was sharing some things with me about this page and I said I would join but they probably will not accept me. Later the same evening another person told me to go look at this page because they were talking about me and to see what a former co-worker was saying. I said okay now I am going to try to join.

I posted the following on my, “Check Out The Special C’s Talking About Me On Concerned Citizens Even Down To A Former Co-worker That Used To Be A Nurse.”

The next day I was accepted. So I then responded to them.

Today a Barry Rhem questioned me as to why I was a member of the group and I responded to him. He did not like my response. I said why ask an ignant question if he already knew the answer. He then came into my inbox with what I felt was a threat.

I didn’t know who Barry was then and don’t now. What I do know is that this page had a post about me for folk to come and just talk about me. I responded to their questions.

When Barry asked me why I was on the page because I didn’t live in Rocky Mount, I said work in Rocky Mount 8 – 10 hours a day and why does it matter if you do not live in Rocky Mount? We kept going back and forth and I said why ask an ignant question if you already knew. He then told me to tell Andy and friends he said hello. I asked him who was Andy and Friends and that was the last thing I posted. Shortly after that is when I received the message in my inbox. I said keep all conversations public.

I was at the basketball game videoing the games when I received these messages from Barry so I didn’t save them. Now I have been blocked so I can’t see them.

I don’t be going to these pages until someone tell me about them and/or send something to me about someone talking about me.

Well one last group I have to respond to. I don’t go around looking for groups and don’t always join groups. The majority of the groups others just added me.

I want to end by saying you see they don’t follow their own rules and when I call them out, they can’t handle it.

What tickles me is:

I didn’t see who the moderator or moderators are. I was told it was a female moderator and she was the only one.

If Barry is a moderator he knew I didn’t physically live in Rocky Mount when I was accepted so he should have discussed that with whomever and sent me a message and said I was not welcome.

I never seen anything about you have to live in Rocky Mount to be a member.

I know there are others who don’t live in Rocky Mount such as Albert Preston Holmes. He lives out in the county.

So if folk who live outside of Rocky Mount can’t be a member then they ought not be allowed to talk about folk who do not live in Rocky Mount. Don’t get it twisted that I have a problem with folk talking about me, not! I have a problem when the get ignant by not allowing the folk to be talked about to respond to their lies, but that is how they operate, they just lie, lie, lie.

The Special C’s get away with mess and keep negative mess going because when folk like me call them out they try to silence us. But they think they are validated because when folk that know me and the others that call them out allow them to paint a negative picture of us, it makes their followers think we are the kind of folk they paint a picture of us. So it ain’t their entire fault.

So Barry Rhems made new rules after last night conversation. But look at the conversations still talking about me. 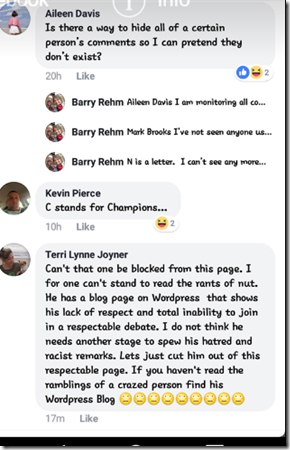