What a sad ending for a night of defeat.

Robert Williams defeated Sharpsburg Mayor Randy Weaver tonight but Williams end up at the magistrate office being charged with DWI.

Sources say that a white male stopped to a store and called the Sharpsburg Police Department and told the white and black officers on duty to stop Williams for drinking.

I find it interesting that no mention of who arrested Williams is in the TV reporting.

Now the following is what was told to me last night but when I went to Mobile Patrol only the DWI charges were there.

See other charges along with the DWI Charge. 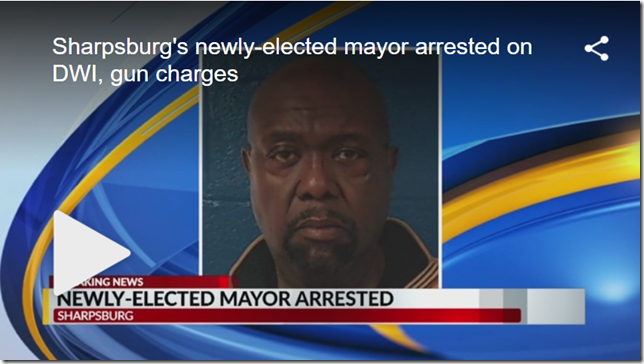 Why were they erected?

When were they erected?

What purpose do they serve today as it relates to all races?

Rocky Mount NC – I Find It Interesting That Rev. Richard Joyner Was Allowed To Be Interviewed For The Appointment To Replace Former Councilman Lamont Wiggins

Rev. Richard Joyner moved to Rocky Mount NC in April. He is still registered in the Edgecombe County Board of Elections Office at a Tarboro NC address. So how does that qualify him to be able to seek the appointment?

The council interviewed 5 candidates on Monday May 7 and Rev. Joyner was in that number. Councilmen Andre Knight made a motion to disqualify Joyner from the interview and Councilman Reuben Blackwell 2nd it. Motioned died. This is interesting.

Joyner said that he made sure he was eligible to seek the appointment so I wonder who did he check with? If the board attorney shared his input and was not in agreement then who deemed him eligible?

It appeared that Joyner was given the questions that were asked during the interview. It is believed that Councilwoman Lois Watkins gave him the questions.

If Joyner is voted in on Monday May 14 during the Council meeting then he will not be able to be seated on that evening which is the norm because he will not be validated as a registered voter and residence of the Ward. What kind of business is that? I have never heard of such.

I had to work on yesterday and I wish I had taken the day off so I could have videoed the interviews so I would not have to rely on getting the information verbally or written from other sources. My sources shared what happened during the interview session.

It would have been great if the local TV Station WHIG-TV had been there but I guess since it was all blacks were being interviewed they didn’t want the folk to see it for themselves. It is funny because they knew it was going to be controversial because it was reported in the paper the day before about how long Joyner had been living in Rocky Mount.