In a special called meeting Tuesday afternoon, the school board unanimously approved a four-year contract for Jackson.

“He’s a visionary,” Gloria White, board chairwoman, said. “Wherever he’s been, it’s left better than it was. I’m very pleased. I look forward to him moving Vance County Schools forward.” (Source: Read more) 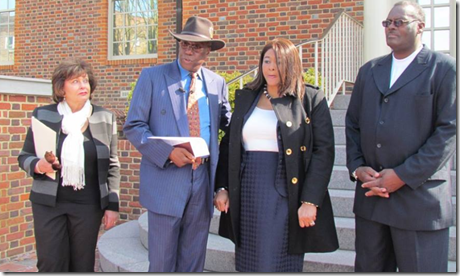 Former Princeville Mayor Priscilla Everette-Oates is asking for upward of $240 million, claiming her arrest and prosecution were retaliation for her investigation into missing FEMA funds for flood damage after Hurricane Floyd in 1999.

Everette-Oates lost a 2013 re-election bid a few months after being indicted by a grand jury on 17 counts of embezzlement by a public official. Those charges were dropped by state prosecutors in March. (Source: Read more)

Photo taken when I did her sister’s homegoing in April.

I have been knowing Ms. Dollie nearly all of my life. It was easy to remember her name because my grandmother’s name is William Ann Dickens Dancy. I bet in Ms. Dollie last days she was singing the following song. After 92 years, Jesus!

Song: Soon I Will Be Done With The Troubles Of This World – Rev. James Cleveland

The following was shared with The DCN News Blog Online TV. Interesting.

The Political Agitator’s response: Pisses me the hell off when folk say that the education system is so damn bad here, that folk are lazy and don’t want to work, they can’t pass the drug test and other but I know from working in Nash County that although employees didn’t go off to college that they are doing some high tech jobs. It goes to show that these employees are trainable and will get the job done if given the opportunity to show themselves approval. The sad part though is some local folk buy into that mess helping those who don’t want to see certain folk make good money and live a good life. They talk so negative about folk here as if they are just dumb, don’t want to work and other but actually that is not the case. It was not older folk fault that they were laid off, jobs moved out of the area and etc. It was not the young folk fault that the job situation was not good and it has taken them some time for the season to come. I love my job and wish everyone could be hired but there are other good places to work in Nash County as well so I am glad to see things are picking up.

Manufacturing continuously has been a leading industry in the local area.

In Nash County, Carolina Gateway Partnership Vice President Krista Ikirt said, the labor force roughly is about 44,000. She added manufacturing jobs make up as much as 18 percent of Nash County’s employee population.

“This shows that we rely heavily on manufacturing jobs in Nash County,” she said.

Headlightdata.com, a website that provides up-to-date economic and workforce information reported by the U.S. Bureau of Labor Statistics, recently released data that showed Nash County ranked fifth in the top 10 counties for the most manufacturing jobs created in 2014. (Source: Read more)

JACKSON, Miss. (AP) — A black Mississippi man who often dressed in Confederate regalia to support the state flag has died in a one-car accident.

Anthony Hervey, 49, was killed Sunday when the 2005 Ford Explorer he was driving left the roadway and overturned on Mississippi Highway 6 in Lafayette County, the Highway Patrol said.

The vehicle’s owner and passenger in the car, Arlene Barnum, told The Associated Press on Monday that Hervey swerved and crashed after another vehicle carrying four or five young black men pulled up alongside them, yelling and looking angry. Barnum, of Stuart, Oklahoma, said Hervey yelled something back at the other vehicle before losing control and crashing. (Source: Read more)