As the years have gone by since I became a community and political activist, I could be and should be a certain kind of ANGRY! Why because I dedicated my life to stand up for the voiceless especially the young and the elderly.

I have been doing such since the late 80’s. The fights I have fought have been 95% other folk’s fight and really did not affect me directly to a certain degree. But when you mess with my folk be they black, brown, white and or other you gonna hear from me.

When it comes to racism dealing with the KKK, the Confederate Flag ie: same, job discrimination and other ism’s that are evil to black folk, I have a certain kind of ANGRY and it is to act professionally on dealing with the wrongness by dealing with the situations bring about the righteousness.

I know there are some good white folk so don’t get it twisted when I say Ignant Racist White Folk because unless you fit that description then you ain’t the one. I have white family and a few white friends but many white associates.

Now don’t get it twisted because the the same goes for black folk because the worst thing I hate is Ignant Safe Negroes who think they have arrived and don’t know their history. Hell they are where they are because of good white folk and good black folk who made it happen.

Thank you Tynesha Lewis for sharing the following, “Why I Changed My Mind About The Confederate Flag” by Perry Noble. This is HOT!

I get tickled the death when folk post stuff about well they took down the flag but it ain’t going to change some folk. Hell it won’t change all folk but it will change some and I know that. I know what I have experienced over the years dealing with folk who didn’t like me but after getting to know me personally they began to change. They realized that I stood for justice however they didn’t like the way I said things because I am not afraid to say what I mean and mean what I say. It is all love!

I am a certain kind of ANGRY but the kind that I will not do anything ignant to take away from my integrity! I will fight the good fight from a professional angle and will challenge anyone, I don’t care how many degrees you may have.

I have a a degree in faith and I am not a religious fool but I have the faith that if I do what is right, stand for justice I have done my very best.

Photo: Senator was speaker for the Dr. Martin L. King Breakfast in January 2015 at the Administration Bldg. Tarboro NC. Click on photo for more photos.

They who say that are hiding behind a code name or talking behind my back. I say talk to me or simple as that just talk about me but sign your name to it or do it publicly. If you don’t have the b to stand behind what you got to say then sit down and shut the hell up. It is time for folk to stop hiding behind their mess.

So I am a racist because I say what I mean and mean what I say and I will say it publicly and I will sign my name to whatever I am talking about.

I talk about black, brown, white folk and other. I hold folk accountable for their actions and ask that folk hold me accountable for mines. Just because you are scared to do what I do, don’t get mad with me. You see I am a professional been doing what I do since the late 80’s. I document what I say and do and what folk do in publicly also so I can show them later if they should get amnesia and say they didn’t say that.

I have been lied on, talked about and I know some folk who have done such. I ain’t mad with ya because I know the truth and I will may sure I correct you.

I believe that just about every person who have tried to discredit me have reaped what they sowed. And for those who have not reaped yet, it is coming. You better be careful when you are dealing with me trying to discredit me because I have been favored to do what I do.

I have been a community and political activist since the late 80’s and I am going to continue until the end. I am not afraid of fighting against injustices, racism and other ism’s that I will not tolerate. I will be the voice for the voiceless, especially the young and the elderly.

Just because I keep up with what is going on around me on the local, state and national levels and I speak out, that makes me a racist? Really? If you ask me I would say I am on top of things and call it as I see it.

So for all of you who say I am a racist, really? I would ask you to tell me how I meet that criteria but ain’t no need because I know what your response will be. I talk about white folk, well I don’t talk about all white folk, just the Ignant Racist White Folk. You say I talk about black folk, well only Ignant Safe Negroes.

The following is one of my favorites and on this past Monday at the Nash-Rocky Mount Public Schools board meeting Evelyn Bullock board chair reminded me during her address when she spoke about how her fellow board members fired Dr. Anthony Jackson.

Folk they went after Dr. Anthony Jackson so who will be next? Who will be there to speak for you?

Folk have asked me over the years why I am so vocal and this is one of the reasons why. However I don’t think anyone can speak any better for me than me. I also want to make evil folk aware that when I see them doing evil to others don’t even come my way with that mess unless you are ready for a fight cause I ain’t gonna tolerate your ignance.

So call me whatever you like but I bet you will not have a conversation with me about what you think about me. 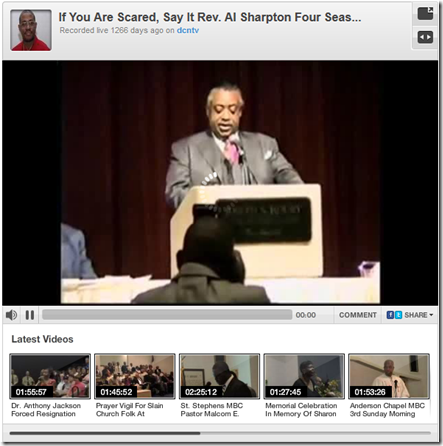