Been addressing it for many years but what does that have to do with me addressing police brutality and other mess?

So is “Our” President is responsible for how corporations treat their employees?

So is he is the reason why they changed to what they offer employees such as eliminating pension plans, 401K, insurance and etc.?

So the President is telling them how to treat their employees or is this something that the employers are doing and using “Our” President to do what they do to make the people mad with him.

Now that is how my ignant a… see it. But I am quite sure some others have the answers so now that I have put the questions out there, bring it on!

Beginning in January 2015 The DCN News Blog Online TV began capturing history in the making traveling to Bertie County covering Senator Erica Smith-Ingram’s swearing in/inaugural events. She has 8 counties and just look at how many folks can have access to this historical moment as she become the first black male or female to hold this seat since it was created for a majority black to represent us in the east. However former Senator Clark Jenkins Edgecombe County has held the seat since it was first created.

Although I have supported Jenkins over the years, I didn’t support him when he was first elected. I supported Patricia Ferguson Bertie County for the seat and she was blackballed by several black leaders here in Edgecombe County. However she was more than well qualified. I also supported Frankie Bordeaux and Shelly Willingham when they ran against Jenkins during a couple of elections. But I did support him during several of his elections and when I met with him, I told him there was nothing he could do for me that when the Boys & Girls Club and others contacted him for his support, that that is what I want to hear that he did along with making sure he represented the east well. 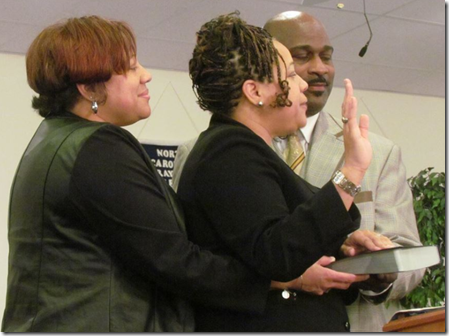 during the past election because I didn’t know her or anything about her. I seen her for the 1st time at the Edgecombe County Human Relations Candidates Forum a couple of weeks before election time. When she got the opportunity to call me in the last hours I explained to her that I couldn’t publicly support her in Edgecombe County because I had nothing to share with folks about her in order to convince them to vote for her. However listening to her speak at the forum and having a phone conversation with her, I felt she would do a great job if she won. My words to her was when she win I would be one of her strongest supporters. So although I endorsed Jenkins because that is who the people in Edgecombe County knew, my heart was with Smith-Ingram.

So for all of those ignant to the facts white, black, brown and other to who I am and have labeled me as a racist, militant and other, I stand for justice no matter who it is for or against. Now if I was the racist that ignant white folks would have you to believe, I would have endorsed Erica Smith-Ingram just because she was black and I could have done that because I don’t see anything wrong with that. However when it comes to politics and asking other folks do things, you have to take things in a different perspective if you don’t know all of the candidates. Now hearing Smith-Ingram campaign speech, she reminded me of Patricia Ferguson whom ran for the same seat because I said hearing Ferguson speak at the 1st Congressional District meetings recognizing that she was a Bertie County Commissioner that she was a powerful black woman. I said if there ever came a time that I could vote for her, that I would so when the time came it was easy for me to choose her over Clark Jenkins. Although Jenkins lived here in Edgecombe County all I knew about him was he was rich and had a couple of businesses here however he had never been to a Democratic Party meeting.

I don’t think that my new senator can say she can’t trust that I will not be one of her strongest supporters because I was straight up with her. I told her why I couldn’t endorse her in Edgecombe County because I knew the mindset of the people here. I can say I voted for her but didn’t endorse her but I didn’t tell her that I was going to vote for her. What I did tell her is that I look at politics in a very peculiar way. I look at where I stand and I look at where the county stand because I am very active serving as a precinct chair and as former 3rd, 2nd and 1st vice chair of the Edgecombe County Democratic Party. I also served as the county chair after being appointed in 1998 –1999 to serve the unexpired term of Roy Gray who stepped down to go to work with former Congresswoman Eva Clayton.

Now don’t get it twisted because you see when Roy stepped down I was the 3rd vice chair, Celestine Lyons was the 1st vice and she had to step down because she was running for a county commissioner seat against another Democrat T.C. Cherry and 2nd vice Mayor Vines Cobb had had surgery and didn’t want to take on the position. I didn’t go to the meeting to become the chair but while there, Taro Knight called me outside and said man you got to move up. I said well I don’t want to but I will. Mind you I had filed to run for a seat on the Edgecombe County School Board but that would not be a problem because the school board was a non-partisan seat so if I was appointed I could do both.

Well of course Rev. Roosevelt Higgs as he always do either nominates himself or one of his closest allies nominates him. Taro nominated me and I was appointed.

I am looking forward to working with and holding my new Senator Erica Smith-Ingram accountable for representing us well in the east. You too have a role to play so get involved or sit down and shut up because ain’t nobody got time to be getting side-tracked by the old political games that have been played. I am going to call folks out more than ever because we are living in some crucial times. I ain’t got time to fight that other party and especially registered Democrats who are really Republicans. My new Senator has enough on her hands as she got to go into the fiery furnace to fight that other party.

Folks it is time to go to work and let’s pray for our new Senator Erica Smith-Ingram and to keep her encouraged so she can represent us well in Raleigh.

Senator Erica Smith-Ingram will be the speaker for the Dr. MLK Jr. Breakfast on Monday January 19, 2015 8:00 AM at the Edgecombe County Administrative Building 201 St. Andrews Street Tarboro NC.

It’s about more than minding their manners. Coach Steve Mask warns players not to post about injuries, which can scare away recruiters. Committing on Twitter to a school is also discouraged – one recent former player tweeted commitments to four different schools without informing any coaches.

”He came across as being not reliable,” Mask said. ”He gets a little joy out of the attention, but it’s not worth it.” (Source: Read more)