Recent cases of police killing unarmed blacks Eric Garner, Michael Brown, and the young boy Tamir Rice raised public furor over equal justice. Rocky Mount’s Police Chief James Moore and Chris Herring Executive Director of the Institute for Homeland Security and Workforce Development at NCCU share what both law enforcement agencies and the public can do to build trust and safety for everyone. 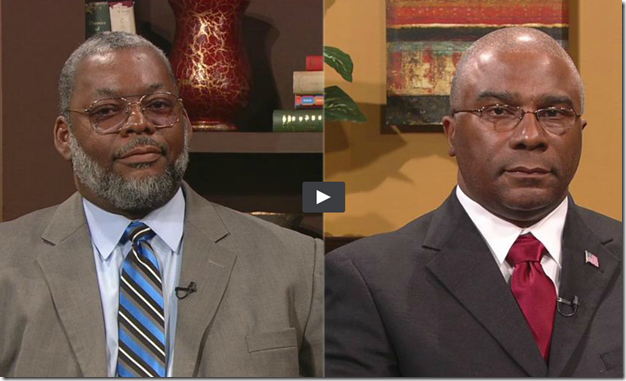 WASHINGTON, DC – This morning, Congressman G. K. Butterfield (NC-01) was sworn in as the 24th Chair of the Congressional Black Caucus (CBC) during a ceremony hosted by the Congressional Black Caucus Foundation (CBCF) at the U.S. Capitol.  The historic ceremony marked the induction of the largest class in the CBC’s 44-year history, which includes five new members of which 20 are women.

Over the next two years, Chairman Butterfield will lead the Caucus, also known as the “Conscience of the Congress” in carrying out its mission of empowering the African American community and addressing its legislative concerns.

In his remarks, Butterfield outlined the CBC’s focus for the 114th Congress to include:

Butterfield said, “We are ready for these fights.  The fight for the future is not a black fight, a Democratic or Republican fight; it is a fight that all fair minded Americans should promote.  We need to use political means, policy and legal means, to reduce racial disparities and move closer to the day when all African Americans will benefit from fairness and justice and realize the American dream.”

Swearing-In Speech for Congressman G. K. Butterfield, the Chairman-Elect of the Congressional Black Caucus for the 114th Congress

“Respect the Past, Confront the Future: Building an America That Works For All of Us”

To the Dean of the CBC and the House of Representatives, Congressman John Conyers, Jr., my other colleagues and their families, CBCF Chair Congressman Chaka Fattah, CEO Shuanise Washington and your team, and the congressional staff, thank you for all you do.

Thank you to my friend and former law partner, Judge Jim Wynn, for administering the oath.

To Democratic Leader Nancy Pelosi and Democratic Whip Steny Hoyer, thank you for your leadership and your friendship.

Assistant Leader, Jim Clyburn, the CBC is honored to have one of your caliber among us.

Thank you to the hundreds of friends who are viewing this ceremony at watch parties in my district, and to my family– a small number of whom are here today.  I ask my daughter, Valeisha Butterfield Jones, to stand.  I ask my cousins and their spouses to stand.  Thank you for supporting me.

It is one of the highest honors of my life to start the daunting process of leading a Caucus that has a legacy of advocating for African American interests.  Our 46 members hail from 22 states, the District of Columbia and the Virgin Islands; representing more than 30 million people.  We are 23 percent of the House Democratic Caucus and 10 percent of the House of Representatives.  CBC members hold seven Ranking Member full committee leadership positions.  We are one of the largest Caucuses in the House of Representatives, and I’m proud to say that we have 20 women members!  All of our new members are women!

The composition of our Caucus brings a diverse set of experiences and viewpoints to address the unique challenges of African American communities.  Every day, members of this Caucus go beyond their constitutional duties to lead in their communities.  They are making a difference in the lives of millions of people.  My colleagues are smart and intelligent legislators.  Each of them was elected to Congress because they prepared themselves, served their community, and knocked down barriers.

The work of these twenty Reconstruction Congressmen was too visionary for the “Southern power structure.”  And so, in 1900, Southern states passed Literacy Tests and the poll tax as devices to prevent black people from voting.  And now, in the 21st century, efforts are still afoot to disenfranchise African American voters.  As a consequence of the literacy test and poll tax and acts of sheer violence, black political participation ended in 1901 when Congressman George H. White (from NC-02) stood in the well of the House at the close of the 56th Congress and said:

“Mr. Chairman, the Negro asks no special favors, but simply demands that he be given the same chance for existence, for earning a livelihood, for raising himself in the scales of manhood and womanhood, that are accorded to kindred nationalities.  Obliterate race hatred, party prejudice, and help us to do the greatest good for the greatest number.  This, Mr. Chairman, is perhaps the Negroes’ temporary farewell to the American Congress; but…phoenix-like he will rise up some day and come again.”

As we stand here now on the dawn of a new Congress, the 114th Congress, we must tell the full story – for many Black Americans, they are not even close to realizing the American dream.  Depending on where they live, an economic depression hangs over their head, and it is burdening their potential and the potential of their children.  Black America is in a state of emergency today as it was at the turn of the century!

My message to those across the country who are tired of business as usual and for those who want to hold our country accountable for treating you with disrespect, I hear you.  The CBC hears you.  America hears you.  The world hears you.  That is why the theme today is so important:  “Learn from our past, but boldly confront an uncertain future.”

•                 Twenty-five percent of black households live below the poverty line as compared to eight percent for white households.

•                 The unemployment rate of African Americans has consistently been twice as high as for whites over the last 50 years.

What is this if it’s not an emergency?

America is not working for many African Americans and we, as the Congressional Black Caucus, have an obligation to fight harder and smarter in the next Congress to help repair the damage.

My leadership of this Caucus will be influenced by my experiences growing up in a segregated South.  Jim Clyburn often says that, “we are the sum total of our experiences;” and that is so true.  My life’s experiences are similar to many of my colleagues.  We saw racism at its worst.

In my hometown of Wilson, North Carolina, the railroad tracks divided our town; a town where 23 miles of unpaved streets greeted black citizens every day.  They were relegated to second class citizenship.  Our mothers and fathers; grandmothers and fathers; our aunts and uncles worked every day to support the Jim Crow economy.

I recall so vividly wealthy white citizens (each morning) driving into our neighborhood to transport black women to the paved streets on the west side of town to do domestic work for a few dollars per week.  I recall white farmers driving onto our street corners at 6 a.m. to transport black laborers to the tobacco fields to harvest the crops for 50 cents per hour.

I recall the structurally inferior black schools and how great black educators were paid less than their white counterparts.  Because of these unbearable conditions, my generation escaped the south as quickly as it could; most went to the North; some to college and some to the military.

Those experiences have helped mold my perspective and make me determined to fight every day to expose and defeat racism and discrimination wherever it may exists.  And so if anyone has any doubt that this Chairman and this Congressional Black Caucus will have any reluctance to fight for our communities – you are mistaken.

•                 You will see the Congressional Black Caucus make criminal justice reform a centerpiece of our work.  There is a well-founded mistrust between the African American community and law enforcement officers.  The statistics are clear.  Video clips are clear.  We recognize that the overwhelming majority of law enforcement officers put their lives on the line every day to protect our communities.  Unfortunately, there are some officers who abuse the sacred responsibility to protect and serve by using excessive, and sometimes deadly force when a less severe response is warranted.  The CBC will seek legislative action to reverse this terrible trend.  Let me also be clear.  To reform the “law enforcement system” will not reform the “criminal justice system.”  The CBC will address outdated sentencing laws, unethical prosecutors and communicate the importance of criminal defendants having competent counsel.

•                 You will see the Congressional Black Caucus fighting for Targeted Funding for Persistent Poverty Communities.  There are 384 counties in the United States where at least 20 percent of the population has been living below the poverty line for the last 30 years.  The Congressional Black Caucus will be strongly advocating the “Clyburn 10-20-30 Plan,” which would direct that at least 10 percent of an agency’s grants and discretionary budget be targeted to these counties.  This is not a partisan issue.  More than 24 million Americans live in these counties.  And the truth is that Republican members represent more of these communities than Democratic members.  We will call on the Republican Conference to join with the Democratic Caucus and the CBC to pass legislation that will address persistent poverty in America.

•                 We will continue to fight against any additional efforts to reduce the deficit by dismantling the social safety net that our communities depend on and programs that create jobs for the unemployed and underemployed.  Irresponsible budgeting in this Congress will be met with dogged resistance.

•                 The CBC understands that nothing is more important than an education system that works for black children and an education system that demands excellence.  We will propose and support legislation to enhance educational opportunities for African American students and strengthen our 105 Historically Black Colleges and Universities who educated black children when other institutions were closed.  We will continue to push for Science, Technology, Engineering and Math (STEM) education for young African Americans, and provide retraining for adults in the 21st century workforce.

•                 On June 25, 2013, the US Supreme Court suspended the use of Section 5 of the Voting Rights Act because of an outdated formula.  The absence of Section 5 protection allows states to pass discriminatory laws that disenfranchise African American voters and other groups.  Partisan redistricting schemes have been enacted with impunity.  We will continue our fight to restore Section 5.

•                 We will evaluate whether American corporations who depend on government contracts and tax preferences are making a serious diversity effort in Board Rooms, executive suites, and the workforce.  We will look at whether corporations are investing in underserved communities.  And if they are failing, we will expose it and insist on change.

We are ready for these fights.  The fight for the future is not a black fight, a Democratic or Republican fight; it is a fight that all fair minded Americans should promote.  We need to use political, policy and legal means to reduce racial disparities and move closer to the day when all African Americans will benefit from fairness and justice and realize the American dream.

I issue a call to action for an “All Hands on Deck” strategy where the CBC will:

1)      Work with our allies in Congress, and in state and local government, to push for policies that will close racial disparities especially in wealth, education, health care, and in the criminal justice system.

3)      We will work with the legal community to pursue a legal strategy to reverse some of the most egregious laws.

4)      And we will push for full participation in presidential, state and local elections with the goal of electing people at every level that share our values.

This is our all hands on deck strategy through which the CBC and its allies will promote a progressive agenda.  As we begin our work, we will continue the struggle to provide leadership and make a difference for those whom we represent.  May God continue to bless our communities with talented leaders as you see on this stage today.  And may God continue to bless each of you.

CBC, it’s our time to make a difference.