My condolences goes out to Gail Silvers, Susan Moore and the entire family of the late LaKetta Moore Pinetops, NC.

Song: Praying For You – William Murphy

First of all I want to say I ain’t mad with you. This is what I do. I am The Political Agitator and my desire is to make sure the process is fair and that the truth be made known. I have no permanent friends no permanent enemies only permanent interest! I have no control over how you will receive this. I am not like so many, that talk about others behind their back and will not say it to others publicly and/or print it.

I know you and I know the other black candidates quite well. I know the white candidate to a degree but not in depth. I know folks who do know him.

I told you some of the following the night before you filed. (See my first letter to you at the end of this article) I told you that I had a problem with you thinking you could come into the Democratic Party and start at the top. I said Councilman Lamont Wiggins is running for Judge and if he wins you could run for his seat. since you live in his district. I said so many others such as Rep. Angela Bryant, Congressman G.K. Butterfield and countless others started on the local level.

TV TIME – Will you give your opponents the same amount of time that you took on tonight? If not, that ain’t right! Yep they can be charged but the same price that you paid and has been paying every night that you have used the show for campaigning.

Experience – Your take on experience, I totally disagree. Are you talking about your Democratic opponents? You talk about experience not needed but you talk about all that is wrong with North Carolina but I am confused because you don’t have a Republican opponent so therefore you have to be talking about your Democratic opponents.

Do you know it sounds like you are saying that our Democrats already in office are not fighting for our teachers and other things that Democrats stand for that is good for all people, all races, all ages, all parties and whatever.

Lottery – My daughter received money from the lottery when she went to college so not only do the local schools get some benefit but those going to college does also. Nope was not set up to fail, they moved the money around to help balance the budget so they say if I am correct. Have you talked to schools about how much money they have received because obviously you have not. I have been in school board meetings.

Jobs – Opportunity for businesses to move into existing buildings. So are you saying you are going to create jobs? Not! Well not on that level. I am proud of you being an entrepreneur with your daycares and in radio when you used to have The Promise in Rocky Mount NC.

Light bills – So are you saying the Democrats already in office have not done all they could do to attempt to deal with the light bill issue. You say they need to give subsides to folks to go in and fix up houses. There is a thing called CDBG that comes into towns every so often if I am correct and houses have been remolded in cities and the homeowner didn’t pay a dime. N.E.E.D. Inc. used to have a program that did such also if the homeowners qualified. I used to be the vice chair of N.E.E.D. Inc. in the 90’s.

Experience – I have said you have not been active in politics and it is a difference between when you have not been attending the Democratic Party meetings and many other governmental and community meetings in the unless you came to video. Why do you feel that you can come into the Democratic Party and think the active folks in the party ought to choose you over folks who have been active for years. Oh no!

That mess about interviewing an elected official means nothing when running for an office.

Name recognition? It makes a difference when trying to get elected because if you don’t have strong political machine so how does that candidate think he is going to get votes when they don’t know him/her.

Criminal records – It depends on what kind of crime they committed. If they have a charge that is gun related and other serious crimes, then they can be a liability to an employer. There are programs out there that works with criminal offenders coming out of the criminal system. Our fine Clerk of Edgecombe County has a program for criminal offenders trying to get employment. So we have got to understand the some times life choices will follow us to our grave.

Elected Officials already in one office – You say don’t vote for those who want to move from one office to another. Now that is too ignant because just like on a job some folks want to move up to higher places or just want to do something different. Again I feel you are insulting some Democrats who are already in office. I mentioned Rep. Angela Bryant, Congressman G.K. Butterfield and countless others have moved from one office to another.

You say no politics with you, well that is a problem my friend because this is politics whether you want it to be or not.

I strongly believe you are using your radio and now your tv show as an opportunity to get elected. I wonder would you be running if you didn’t have all of this media access.

This office does not pay enough for a person to live on this income alone so I didn’t get your point of some see it as a money maker.

Again I ask are you going to give your opponents the same amount of time on this show like you spent on tonight?

Voting For A Candidate I Look At These Things

Edgecombe County – Open Letter to Bronson Williams Candidate For District 3 House Seat And The Voters In The District – March 4, 2014

Click on candidate to learn more about the candidate

I am voting for these candidates

Those I can not vote for

Voting For A Candidate I Look At These Things

The Political Agitator response: Damn Dan Whittacre is at it again. Too ignant! And to think about this ignant ass was in Tarboro at the candidates forum on Tuesday is just sickening.

WASHINGTON — A Democratic primary challenger to U.S. Rep. G.K. Butterfield of Wilson this week accused him of lying about his military record and refused to drop the matter Thursday after official records confirmed the congressman’s service. 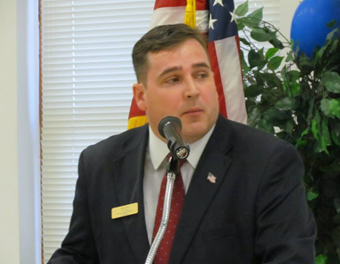 Dan Whittacre of Henderson said he filed a request for Butterfield’s record with the National Personnel Records Center near St. Louis. The center wrote back in a letter Whittacre received last Saturday that the documents could not be found. (Source: Read more)

Video/Photos: Candidates Forum Sponsored By Edgecombe County Human Relations Commission – See Who Showed Up And What They Had To Say

Early voting began yesterday and I hear some folks talking about a low turnout in some areas. Well this was just the first day. Some folks didn’t know or forgot about it. But guess what, folks will hear about it today and definitely this weekend when they go to the church and the club because I hope both places and others will announce it. There should be advertisements on the local radio and tv stations.