To hear almost any Republican lawmaker speak in post-shutdown Washington is to hear that Democrats are refusing to negotiate to reopen the government and avert a debt default. It’s a talking point that may be selling well, but it’s only true if you ignore anything that happened before last Monday at about 11 p.m. 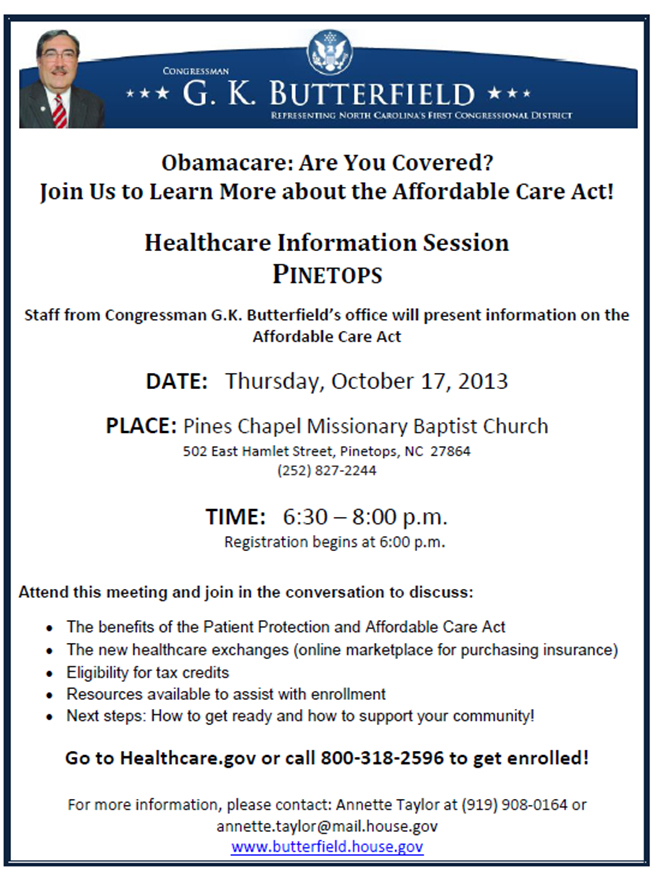 The DCN was at the candidates forum on Thursday October 3, 2013. See for yourself what took place. I will come back later with my response to the forum. 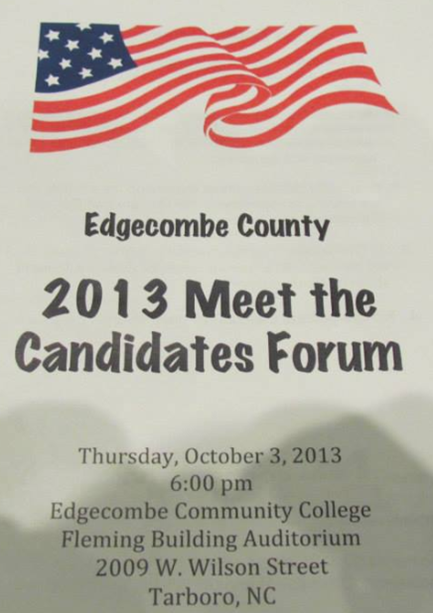 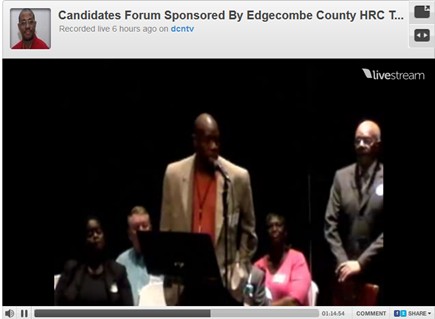 A. Peter Bailey is a man of note and distinction. The Black writer contends that: “Despite strong evidence to the contrary, many Blacks believe with all our hearts and souls that the path to equal rights, equal justice and equal opportunity lies in electing people to political offices.” If you don’t see the truth in Bailey’s statement, it’s for sure you won’t be inviting him to speak to your church or organization.  Others who wanting to engage in stories that empowered and enlightened the Black masses, are booking the self-described Garveyite to tell African-American audiences that they have “been bamboozled” into believing that voting and politics will change their lot in life.

As a speaker, Bailey coaches Blacks to be clear and uncompromising in their lives and goals. He provides a needed dose of reality with an abundance of history and direction. Bailey encourages Blacks’ wealth and community-building. “Black people have a powerful weapon we don’t effectively use. That weapon is our individual and group economic resources. We spend too much time focusing on electoral politics and not nearly enough on wisely using the trillion dollars that we turnover annually.”

Bailey brings stories and insights on Marcus Mosiah Garvey, Jr. to his presentations. Marcus Garvey represents Black self-reliance in America. Garvey is quite a story. He was a staunch proponent of Black nationalism, to which end, he founded and forged the Universal Negro Improvement Association (UNIA). Through public speeches and his newspaper The Negro World, Garvey became one of the most significant Black leaders of the 20th century. He advanced a philosophy known as Garveyism to inspire economic empowerment among African Americans. Garveyism would eventually inspire others, ranging from the Nation of Islam to the Rastafari movement that proclaims Garvey “a prophet.”

Bailey’s presentations are inspired by the vision and accomplishments of Garvey, one of the greatest Black leaders in history. Garvey was a role model to Father Divine, Elijah Muhammad and Malcolm X.   His legend is based on his leadership toward Blacks’ pride and self-determination. Garvey evolved Booker T. Washington’s approach toward business and self-reliance, through the UNIA and he directed the largest mass movement among African Americans in history. Garvey’s UNIA movement and vision became procedural and conceptual models toward African Americans capitalism ventures.

In his presentations, Bailey makes positive Black history unfold. In the 1920s, it was eye-opening for Blacks across America when Garvey purchased an auditorium in Harlem and proclaimed it “Liberty Hall.” From that platform Garvey and the UNIA established 700 branches in 38 states. Garvey’s economic impact in America included hundreds of profit-generating UNIA businesses across the country; and his never again duplicated campaign that persuaded Black investors to purchase stock in an international shipping line to carry passengers and freight between America, Africa and the West Indies. The Black Star (BSL), incorporated in 1919, was capitalized exclusively by African Americans. The BSL acquired three steam ships, but by 1922, they were lost and the corporation collapsed.

Keynote speakers are integral to any gathering looking to further themselves with knowledge and networking. Black schools, forums and conventions need Bailey and his important motivations toward Black growth. More public attention needs to be directed toward the how and why of Blacks building, owning and controlling our own income producing assets. Bailey can inspire and unify an audience with a common purpose. Brother Bailey’s focus on Black community building is something Blacks need to hear nowadays. Bailey says the election of Barack Obama has “proved nothing.” A former Ebony magazine editor, Bailey points audiences to the fact that, “We spend $600 billion a year and should be serious about knowing and understanding that with economic power, political power is automatic.”

He brings a sense of history to his tales. Bailey served as a pallbearer for Malcolm in 1965. Nowadays, he says “blind devotion” to Obama and local politics prevents African Americans from participating in activity toward the collectivity we need to flex our financial and political muscle effectively.- Email Bailey at apeterb@verizon.net.

William Reed is publisher of “Who’s Who in Black Corporate America” and available for projects via the BaileyGroup.org 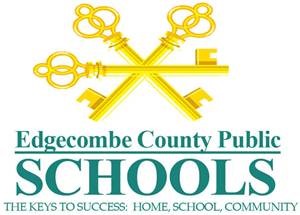 Tarboro, N. C. – One would think that after a career in the National Football League (NFL), an individual who chooses to become a teacher would be immediately interested in coaching football.  That was not the case for Izel Jenkins, a teacher at West Edgecombe Middle School.

“I played football professionally for seven years and then I coached for a little bit,” said Jenkins.  “I got away from coaching and focused on my teaching career.  I helped with area football teams by giving suggestions, but that’s all I was interested in doing.”

When the head football coach position became available at West Edgecombe Middle, Jenkins was not initially interested.  “I was asked to consider being the head coach,” Jenkins stated. “I gave it some thought and pondered over the fact that I could run my own program and implement things I think will benefit the kids here at West.”

Jenkins explained that the football game has changed and evolved.  “There is a different defense used in national football today.  People think it’s too complicated and it can’t be done saying ‘It’s too hard. The kids won’t be able to do it.’ But my philosophy is:  if you don’t teach it to them, they can’t learn it.”

This is the reasoning behind Jenkins decision to pursue coaching again.

Jenkins says he enjoys his teaching career and the opportunity to impact the lives of children.  “I enjoyed playing in the NFL.  However, the nine years I have spent with Edgecombe County Public Schools as an educator brings a different kind of enjoyment.”

Going to the NFL was not in Jenkins’s original goals.  “I went to North Carolina State University where I was actually planning to be the Second Lieutenant in ROTC.  I was also on a track scholarship and I walked onto the football team. I was told that one day I was going to have to make a big decision between track, ROTC, and Football,” explained Jenkins.

“I was at the park playing basketball when the NFL draft was going on.  My girlfriend, who is now my wife, called me and said ‘You just got drafted by the Philadelphia Eagles.’  I didn’t believe it, thinking to myself: How could I get drafted? I only played football for two years,” said Jenkins.  He laughed and added “But when I got that call that said ‘Congratulations Izel.  We have your plane ticket at RDU.  You need to be on the plane to Philly tomorrow.’  I was on the plane the next day.”

Jenkins does not talk to his students much about his days in the NFL; however, he makes connections with students by discussing his middle school times.  “Middle school is crucial,” explained Jenkins.  “It’s the gateway to success and I want to make the impact on my students that my teachers made on me.  I have to give my students a personal experience because a lot of them remind me of myself.”

Davaraeway Pride, a seventh grade student at West Edgecombe Middle School, is also on the football team that Jenkins coaches.  “He’s an all-around good man and he’s one of the best teachers I know.  He’s teaching me about respect and always helps me in class and on the field,” says Pride.

Seventh grade student and football team member Clifton Richardson described Jenkins as a “life changer.”  Richardson expressed that his coach “gets you to change your life around by staying on you to see you succeed.  Football is a competitive game and with Coach Jenkins’s help, I’m getting prepared for real life and staying out of trouble.”