My condolences goes out to my neice Keyona M. Smith, my cousins Bettie Jean Highsmith, Wanda Kay Highsmith Jones, Steve Highsmith and family on the loss of your love one Willie Cleveland Highsmith Jr. “Man”.

(ThyBlackMan.com) Lebron James now has the ring he’s been seeking for a long time.  But there is another way in which he stands out from the mass of Black athletes: he is harnessing his own financial prowess instead of passing it all across to the white corporate establishment. (More)

Response: Damn I get so sick and tired of ignance. "Ignorance will never end. Even those with money can’t buy SENSE!!" Author: Curmilus Dancy II The Political Agitator

Responding to a question about the increase of Americans getting Social Security benefits, he said, "that is an unfortunate consequence of failing economic policies coming from the president so that now when people are running out of the unemployment benefits, now they are looking toward going on Social Security disability… so once again we are creating the sense of economic dependence, which to me is a form of modern, 21st century slavery." (More)

Rev. Jeremiah Wright (pictured), the former spiritual adviser to President Barack Obama, made headlines over the weekend for delivering an angry sermon just a scant few miles from the White House. (More)

Rangel victory take two. Nearly two weeks after being declared the winner of his Democratic primary in New York, but then having that thrown into doubt by a large number of outstanding votes, Charlie Rangel appears to have really, really won this time. (More)

I read the article, “Few turn out for early voting in primary runoff” – Rocky Mount Telegram and found it to be quite interesting. Where is the awareness from my local party? I just don’t get it.

I want to thank the Daily Southerner for printing the names of those whom are in the runoff in their article, “Early voting under way for July 17 elections; so far 15 votes cast.”

Folks we need people in place on the county level that are going to make folks aware of what is going on. Why has there not been any meetings called? Don’t tell me there is nothing to talk about because a lot have been going on over the past couple of months. The party could share what is going on in Raleigh at the NC State Democratic Party because everyone didn’t attend the State Convention.

Okay don’t have to have meetings but would be nice however there could be an email list making people aware if nothing else. There is no local website active. Again I just don’t get it.

I sure hope the next county chair and officers will use technology to make people aware of political issues locally, statewide and nationally.

What a sad day in Ignantville but I blame the good citizens of Princeville for not speaking out about what The Princeville 3 now along with the Interim Manager are doing. They can not blame Commissioners Howell and Knight because they have been calling the shots and not making them aware of what moves they were making. They didn’t allow them to ask questions and when they did they got ignant answers.

Damn just maybe there could be some criminal charges to wake The Princeville 3 up because I hate to think that they are just that damn ignant.

I have much respect for Mrs. Maggie Boyd however when will she decide that she need to step down as the Interim Manager and go home. However she could attend the meetings as a citizen. I can’t understand why she would allow herself to be a hinder to a commissioner not being able to represent her ward and all of the citizens in Princeville because she represent all of them whether she live in their ward or not. If someone needed something done I am quite sure they would call her because they know she is not afraid to put their concerns on the table.

I truly believe that Commissioner Sherrod is allowing his titles such as being over the Police Department to play a role in his following the Mayor and Commissioner Andrews-Purvis.

I truly believe that Mayor Everette-Oates and Commissioner Andrews-Purvis is just simply ignant when it comes to politics.

Doc. 2. Recommendation to Issue Notice and Warning to Town of Princeville dated July 5, 2012 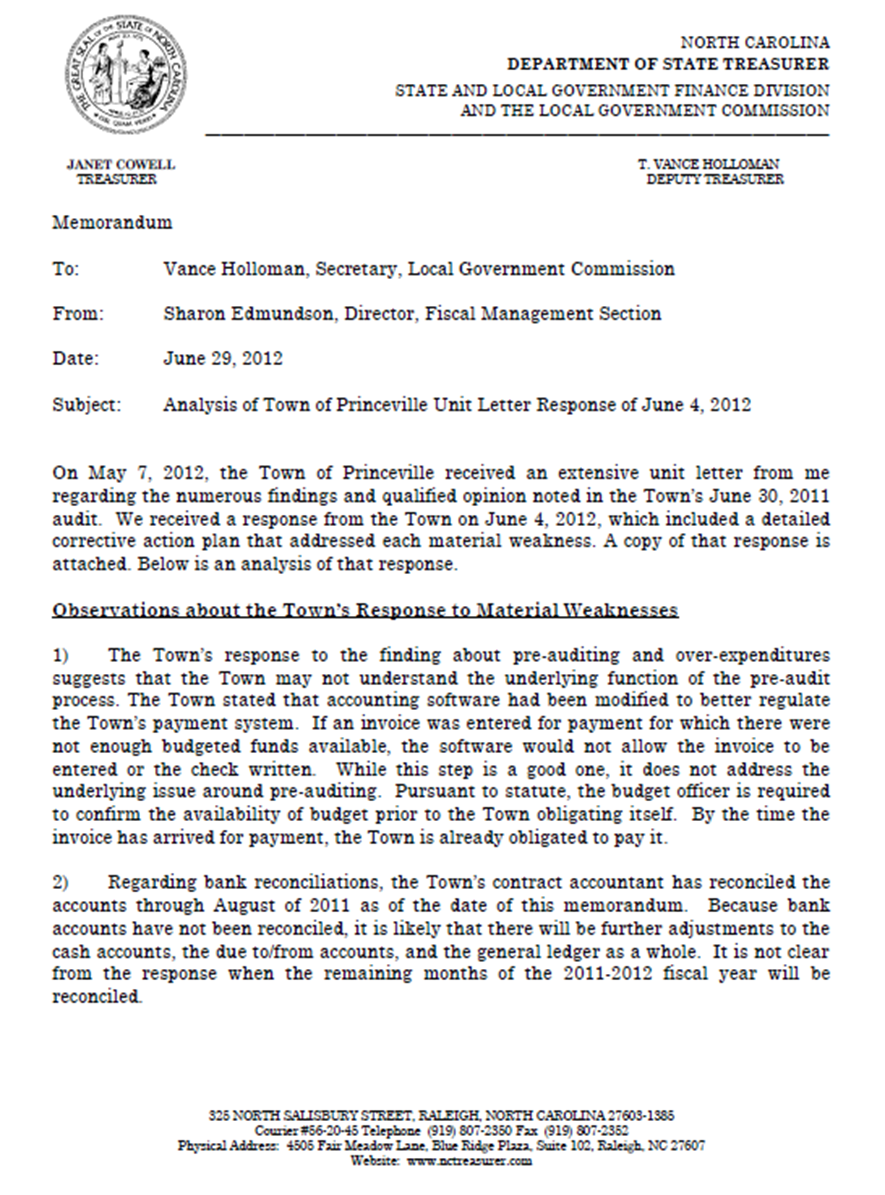 Recommendation to Issue Notice and Warning to Town of Princeville dated July 5, 2012 Page 1 of 7 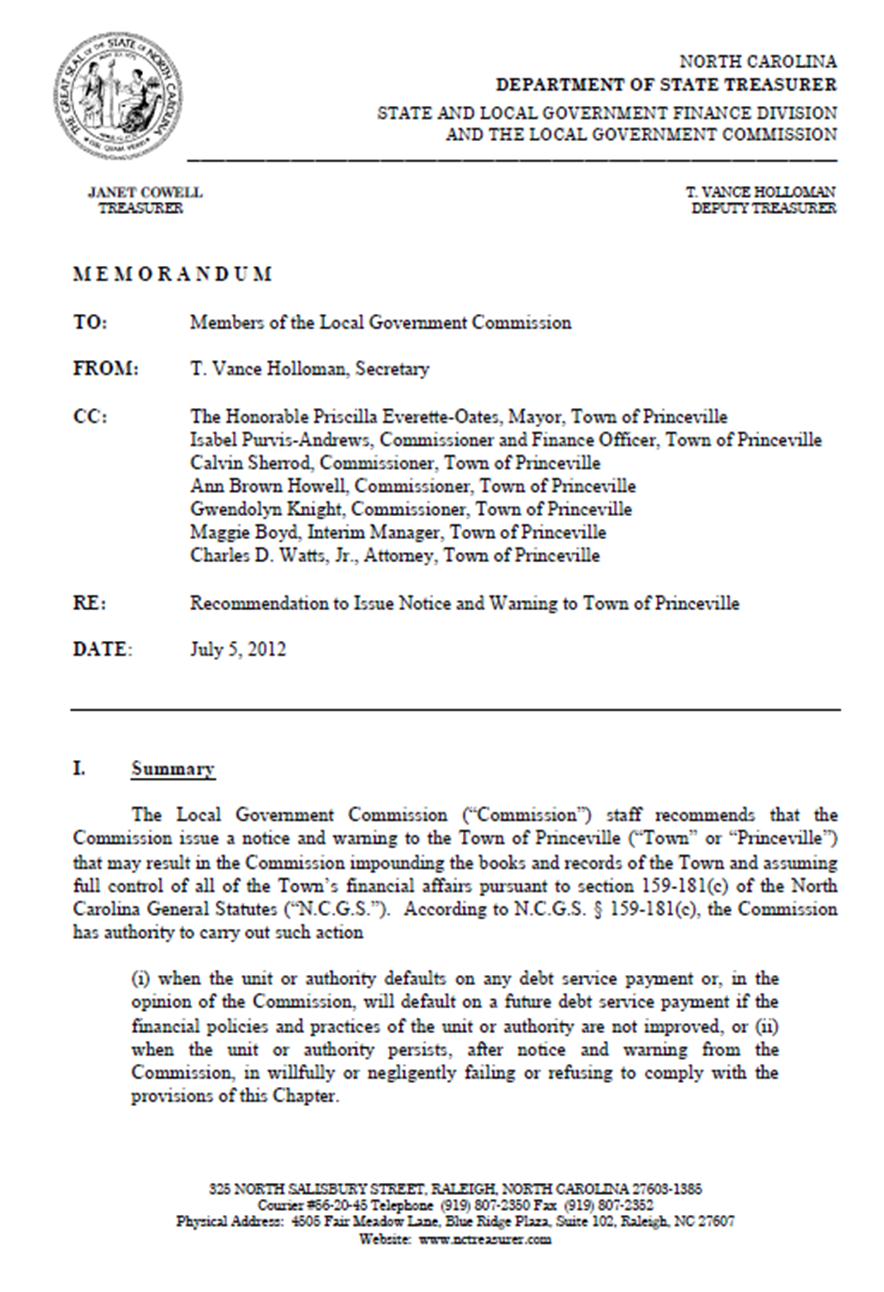 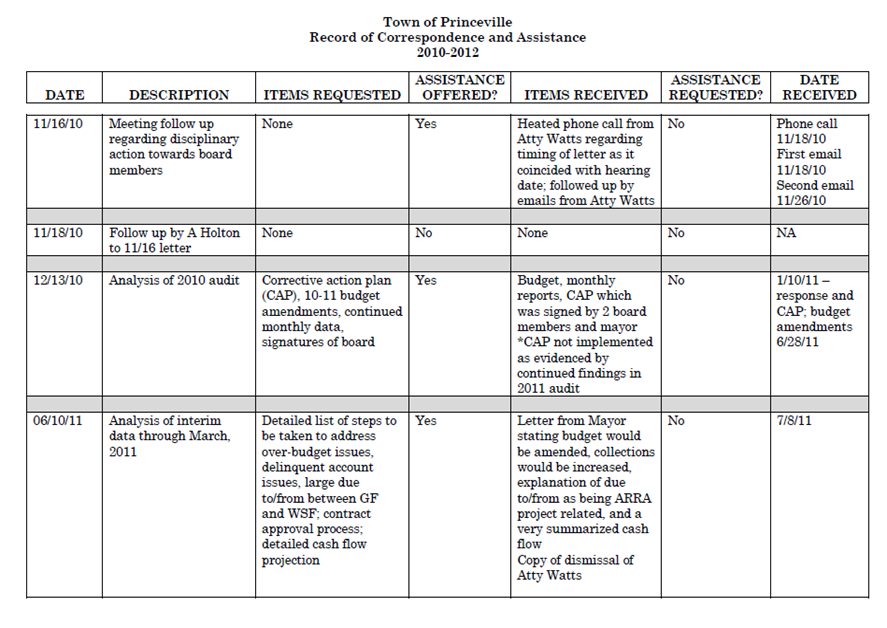 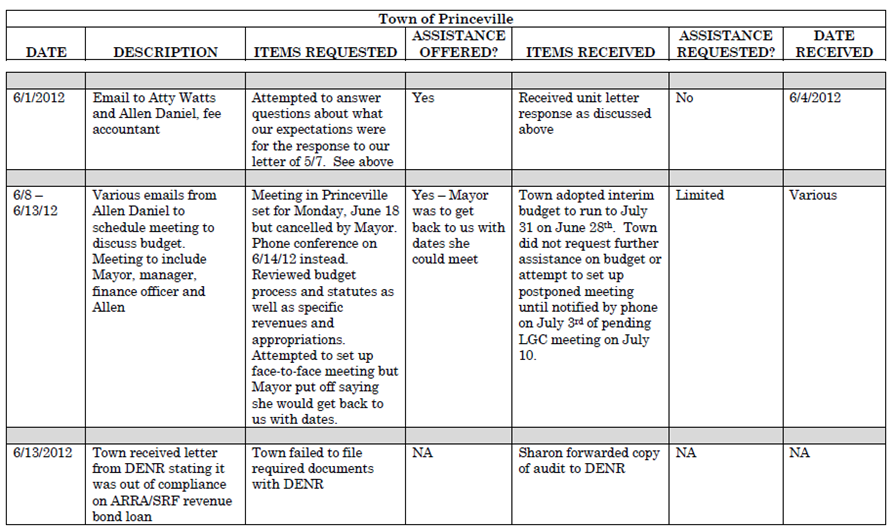 Fighting crime takes a lot of work. City officials are hoping a lot of play will help in that effort as well.

Teaming up with the police department, the city’s Parks and Recreation staff has put together a new summer lineup of organized sports and movie nights. (More)

Response: You see this is what tickles the hell out of me, no respect for the black man. Damn it does not matter if his ignant a . . don’t like the President just do what is law.

Response: Very interesting. Why does he need all of this protection? So who are paying for this?

After George Zimmerman was released from jail for the second time, posting bail on a second-degree murder charge last week, he made his way to a "safe house." (More)

RALEIGH, N.C. Whose definition of bipartisanship will North Carolina voters believe as they decide in November whether the Legislature should remain in Republican hands after a contentious two-year session?

This year’s General Assembly’s budget-adjustment term ended this past week after GOP leaders persuaded a handful of Democrats to help override three vetoes by Democratic Gov. Beverly Perdue, including the budget bill for the second year in a row. (More)

Response: This article made it to my ignant column because these are some ignant pastors and folks who agrees with them.

An influential group of black pastors is urging black Christians to shelve their support of President Barack Obama until he reverses his position favoring same-sex marriage. (More)