I have stated several times that I will be more actively engaged in upcoming elections than ever before.

The DCN can play a crucial role in the candidates campaign. It will not be business as usual and because of the need to be more politically involved in what goes on around me, I will be educating others along the way. It will be up to others how they receive the information and how they use it.

I heard the commercial being discussed on a local radio talk show this week and I thought it was so funny that some folks had a problem with what the little boy did but no one mentioned how the man disrespected the little boy. Hell in my old age I can’t take one-sided damn issues without dealing with the whole issue.

So why is it these folks didn’t have an issue with the man disrespecting the little boy? Let’s talk about the whole issue and stop trying to get on the damn bandwagon of trying to find a fault with some of the issue at hand and not dealing with the whole issue.

I did hear a couple of guys say they been there with dealing with men dating their moms so they could relate. 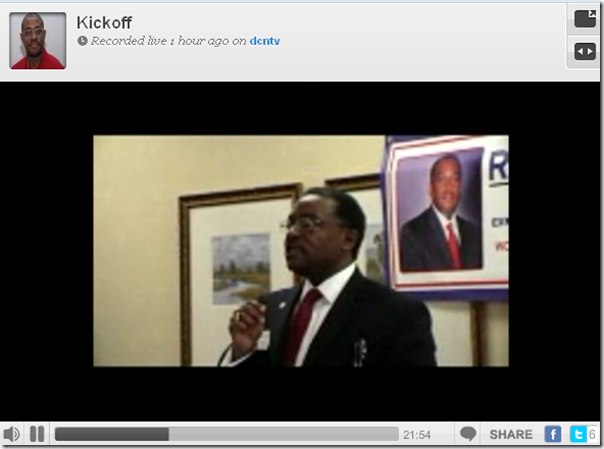 In response to: Trial Clears coach

According to several witnesses, Whitley chased the boy and spanked him on his rear end during a summer practice at Tom Stith Park after the boy made a blatant late hit on another player, who was on the ground. So when has it become legal for a coach white or black to spank a child without the consent of the parent?

I understand, “The primary goal for these coaches is to teach the kids how to play football in a safe manner,” Hester said." However I am missing something when PHYSICAL discipline is made an exception and not the rule. I don’t give a damn if the coach is white or black.

I understand the coach says, “The lateness of the hit as well as the spearing is what caught my attention,” Whitley said. “I almost did a double take.” Well damn I attended a couple of Cougar Cubs games at home and away and I seen some late hits and even seen the rescue squad come to pick up some small children during the 1st 2 games I attended. I said these small children are more physical than the big children. I didn’t see any coaches PHYSICALLY discipline any of the small children.

I understand, "Disciplining a child because of a dangerous hit is about “providing a safe atmosphere” for the players, Joe Bell said from the stand. Bell, also a coach at the time of the incident, said coaches have to teach children to tackle correctly so they don’t break their necks." I have no problem with a coach teaching children to tackle correctly but I am not understanding where the PHYSICAL discipline comes in at? This has not been explained throughout this article. Maybe I had to be in court to understand it.

Now the following makes the most sense in this article, "Whitley, tearing up at one point, said he regretted how things turned out.

“I didn’t handle it as well as I should have,” Whitley said."

I understand and recognize that the coach got caught up in the heat of the moment however I commend him for admitting it. I hate it happened like that but sometimes we do some things we regret we have done however it does not make it right. So if the coach admitted he didn’t handle it as well as he should then how in the hell can all of the emphasis be put on the child, a child who acted like a child but the coach is an adult and an attorney. This goes to show that we all children and adults sometimes make bad choices but how we acknowledge the actions is the key.

Now this was right on point, "Halifax County Assistant District Attorney Vershenia Moody argued during her closing remarks that Whitley’s years of volunteering as a coach don’t make up for the fact that he crossed the line when he inappropriately disciplined the player.

“What caused (Whitley) to lose his cool, I would submit, was when (the boy) ran away,” Moody said. “By that time, we had gotten beyond providing a safe atmosphere.”

I totally agree with DA Moody.

Now as it relates to Rocky Mount NAACP President Andre Knight’s role. He was carrying out his duty as President and that was to represent the parent/child. This is the same as the role of the attorneys in this case.

I understand how Knight can say he was concerned race might have been a factor. Not only was race a factor however I can see other factors coming into play. The coach being an attorney, hell I sympathize with him because of that fact because I would hate to see his career go down the drain because of this incident.

I understand the coach had no children on the field and has donated countless hours to serving children and community by volunteering as a coach. I feel his pain however it does not justify the PHYSICAL discipline in my opinion.

I agree the community need more people to volunteer their time however I be damn in we need volunteers whom can not discipline themselves and I don’t give a damn if they are white or black.

Note: I had stopped attending basketball games at SouthWest Edgecombe several years ago because I didn’t like the actions of a coach during the games throwing chairs and acting like he was drunk, in which he probably was. But one day some parents asked me to attend a meeting and they talked about the coach. But one of my major problems during that meeting was when a husband and wife had an issue with the coach but said their child had made a damn "E" on his report card. I didn’t know these parents like that but I called them when after the meeting and told them that I had an issue with them sitting in a meeting complaining about a coach when their child had an "E." I said first of all the coach would have to discipline my child because my child would not be on the team with such grade. But the main thing is the way this coach acted, my child if he was an "A" student I would not have allowed him to play on his team. I questioned the parents how in the heck did they allow their children to play on this coach team? The coach was white and the child was black.

Oh well call me a racist but I don’t care because I try to look at the whole picture and the facts in cases that I am familiar with and then I give my opinion. Anytime there are people of difference races involved, race is a factor to a certain degree. Whites and blacks do not have the same resources in most cases. This do not make it a bad thing always but just a FACT!!