I do what I do out of pocket attending meetings videoing and taking photos making them public for folk who do not attend for whatever reason. It takes funds to do what I do.

I video a variety of things from meetings, banquets, sporting events, funerals and other. I post my videos on YouTube where you can access them at anytime that is convenient for you.

I also take photos and post them on my Facebook page and make them available for others to see. If someone do not have a Facebook page they can still view the photos.

You have 3 options that you can send donations, Cash App, PayPal or send via USPS.

I have a Cash App  and a PayPal account that you can send money from your phone.

Thanking you in advance.

Now Stroll down the Blog to read some good and powerful information!

END_OF_DOCUMENT_TOKEN_TO_BE_REPLACED 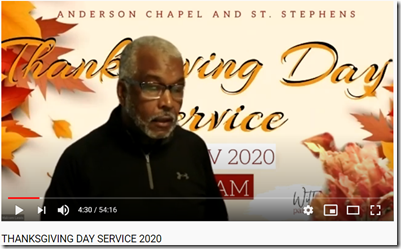 You can also view video here.

Didn’t he make a way? We are here today in spite of. 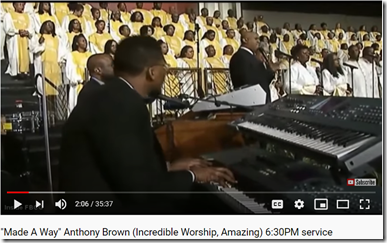 Today I know some folk are mad because of the COVID-19 is in the midst.

Some folk are mad because they got to wear a mask.

Some folk are mad because they are being asked not to gather in crowds even with family.

Some folk are mad because they have loved ones in the hospital, healthcare facilities and other and they can’t go see them.

Some folk are mad because the Governor is trying to keep us safe in spite of the circumstances of the Pandemic that we are facing.

God is trying to tell us something are you listening?

Everyday is a day of Thanksgiving for me.

I woke up with my right mind.

My family circle has not been broken.

I got food on my table.

I got love in my heart.

I am grateful for the meal I am going to receive on today. However the only thing that changed today is the menu because I eat everyday. I ain’t excited about eating. I am excited because I have an appetite.

Most of all I am excited about what the songwriter said.

Now a day of rest which I get 2 days Holiday Day Pay but I am going back to work on Friday although I will get paid for this day anyway. I am going to work Saturday and Sunday also. See if you get out and work you can not only eat but provide for you and your family.

So because he has been good to me, I am glad about it because he let me live to see another Thanksgiving Day.

Please join us on Tuesday, December 1, 2020 @ 5 p.m. for our next Community Prayer Call (701-801-6982). Mr. Ben Money, Deputy Secretary for Health Services, NCDHHS will join us along with Mr. Thomas Holland, Principal of Carver Elementary School for a Q&A session.

Mr. Money and Mr. Holland were with us for our November 17, 2020 call, you may listen to the information that was shared by clicking on this link.

The Political Agitator’s response: Thank you Governor for the update. I am waiting on you to take us back to Phrase 1 because Trump and his supporters have gotten us in the situation we are in.

He said the state now has 20 counties considered “red” under the state’s new coronavirus alert system — double what it was when the color-coded alerts were introduced last week. Counties can also be ranked orange or yellow.

The new executive order implements the new mask rules Nov. 25 at 5 p.m. and also extends North Carolina’s Phase 3 executive order to Dec. 11, one week after it was set to expire.

“We are in danger,” Cooper said at a press conference Monday.

Cooper’s briefing came shortly after the state Department of Health and Human Services reported 1,601 people hospitalized with COVID-19 in North Carolina, a new record, and before the Thanksgiving holiday. The Centers for Disease Control and Prevention has strongly advised that people do not travel for the holiday. (Read more)

After weeks of delay, the head of the General Services Administration informed President-elect Joe Biden on Monday that the official governmental transition process has been approved.

GSA Administrator Emily Murphy said in a letter that Biden, whom she referred to as “the apparent president-elect,” is now able to access millions of dollars in federal funds and other resources to begin his transition to power. In her letter, Murphy also denied that she had been under pressure from the White House to delay the process.

“I have dedicated much of my adult life to public service, and I have always strived to do what is right,” she said. “Please know that I came to my decision independently, based on the law and available facts. I was never directly or indirectly pressured by any Executive Branch official—including those who work at the White House or GSA—with regard to the substance or timing of my decision.”

Trump in a pair of tweets vowed to continue his legal fight to contest the election results but said, “I am recommending that Emily and her team do what needs to be done with regard to initial protocols, and have told my team to do the same.” (Read more)

The Political Agitator’s response: Now do you see why he do not want to leave office? Dude has some serious issues. I am just going to wait to see what the outcome will be after January 20, 2021.

It looks increasingly certain that on Jan. 20, 2021, around noon, Joe Biden will take the oath of office as president, and Donald Trump will lose both his job and one of its most important perks.

Trump has faced investigations involving his campaign, his business, and his personal behavior since he took the oath of office himself four years ago. As soon as he becomes a private citizen, however, he will be stripped of the legal armor that has protected him from a host of pending court cases both civil and criminal.

He will no longer be able to argue in court that his position as the nation’s chief executive makes him immune to prosecution or protects him from turning over documents and other evidence. He will also lose the help of the Department of Justice in making those arguments.

While it is possible he could go to jail as a result of some of the probes of his business affairs, the soon-to-be-former president is more likely to face financial punishment in the form of civil fines, law enforcement observers believe. He may also be embarrassed by financial and other secrets that will be exposed in court. Nearly all his legal troubles are in his hometown of New York, where he once basked in the tabloid limelight as a young mogul and where he rode a golden escalator into an unlikely political career.—

Here are some of the most perilous cases that await President Trump when he’s no longer president — and here’s how he could yet use the powers of the nation’s highest office to escape punishment: (Read more) 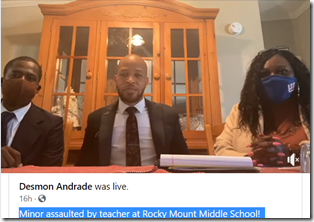 Rocky Mount/Nash County!!! If you have any information regarding teacher Jamie Dunn’s assault of Minor Charity Cutler on April 30, 2018 at Rocky Mount middle school please contact The Freedmen Law Group! — with Kisha Cutler

We will not allow children to be abused by those charged with protecting them without justice being served on all legal fronts! This will not be swept under a rug! Please spread the word that the abuse of our kids is a no go!

Do you feel that we need to go back to Phrase 1 to try to get the Pandemic under control?

Do you feel comfortable going to work?

Do you feel comfortable sending your children to school?

Do you feel comfortable going to shop for products that you really need?

Do you feel comfortable with having family or friends to come to your house to visit you inside your home?

Do you feel we need more or less restrictions dealing with COVID-19?

Do you support your Governor recommendations for dealing with COVID-19?

Do you know anyone personally that has died from COVID-19?

Do you feel that if the President of these United States had pushed the mask mandate that we would be better off?

I have been hearing the world is coming to an end all of my life. That used to bother me. But after I came to a conclusion it no longer bothers me. I ain’t going to share my ignant opinion just yet. You know I am ignant so it is just my ignant opinion.

So what comes to mind when you hear someone say the world is coming to an end but you been hearing it all of your life?

Here is the resources that Mr. Money from NCDHHS mentioned on the call:

The next Community Prayer & Community Update will be on December 1, 2020.

Please join us today (701-8016982) for our community prayer call hi to update the community about COVID-19 and some other important issues on 5:00 PM – 6:00 PM. The call is held every 2 weeks on Tuesday to give a community update and to offer prayers.